Self-interest is woven into the fabric of neoclassical economics

Self-interest is woven into the fabric of neoclassical economics 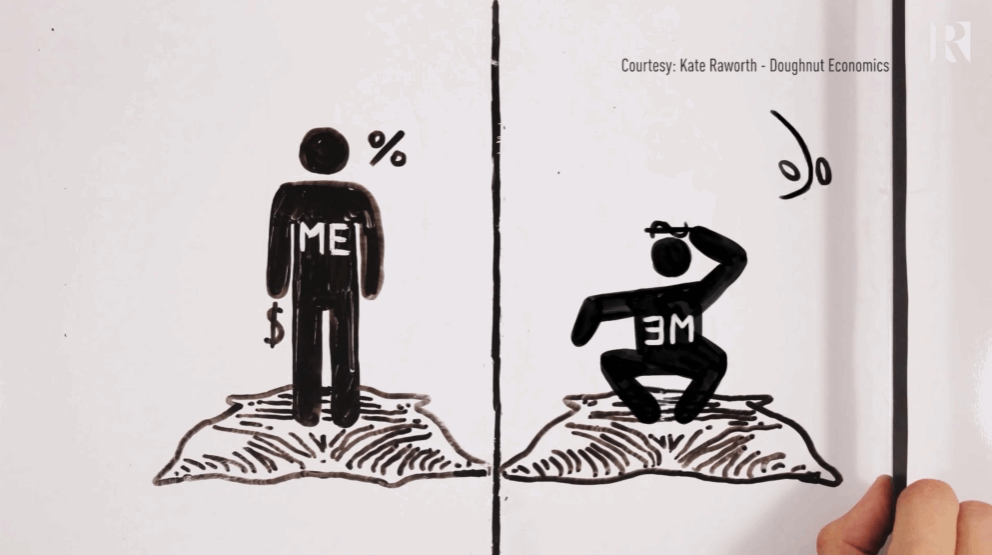 Famously, the broadcaster and natural historian Sir David Attenborough said that someone who believes in infinite growth is either a madman or an economist. One of the big problems we face today is that in our hunt for growth, mainstream economics has been taken over by madmen.

Christian Felber, who in 2010 founded The Economy for The Common Good, met up with host, Ross Ashcroft, to discuss his mission to eliminate the fundamental contradiction between neoliberal values and social well-being.

In his book, Licence to be Bad, Cambridge economist, Jonathan Aldred, charts how neoclassical economics has ultimately incentivised ‘rational’ human beings to do bad things, not just to the planet, but to one another.

Aldred’s thinking is the starting point for Christian Felber’s notion of an economy for the common good which challenges the prevailing economic orthodoxy of the neoclassical school that emerged in the late 1870s and whose theory dominated economic discourse a century later.

The problem as Felber identifies it, is that this economic theory of ‘pure science’ focuses on financial indicators to the exclusion of ethics, politics, ecology, gender and uneven power relations often associated, for example, with the godfather of macroeconomics, Adam Smith.

By focusing on financial indicators to the exclusion of a more holistic approach, Felber says that “the neoclassical economists of the late 19th century separated economic science from life, from democracy, from relationships, from everything.”

Felber argues that this direction of travel is wrong and says that what is needed is a reconciliation of economics with the kind of democratic values that makes life worthwhile.

This sentiment is echoed by Kate Raworth. In her book, Doughnut Economics, the renegade economist says:

“To make humanity fit into their theories, last century’s economists invented rational economic man. He stands alone with money in his hand, a calculator in his head, ego in his heart and nature at his feet. He hates work, loves luxury, has insatiable wants and knows the price of everything. But the trouble is, on being told that he is like us, we actually become more like him.”

Self-interest is woven into the fabric of neoclassical economics whose rationalizing logic is paradoxically damaging to our societies, environment and eco-systems. Birthed at Cambridge University in the early 1900s, this economic school gave rise to the damaging ramifications of neoliberalism.

Since its inception, neoclassical economics has aspired to emulate a mathematically precise science like physics by pushing out ethical and philosophical questions. Felber cites the inability of neoclassical economists to have foreseen the 2008 financial crisis as an example of how on the surface their models appear to be as precise as natural science but are in fact predicated on a form of disconnected social science which is imprecise.